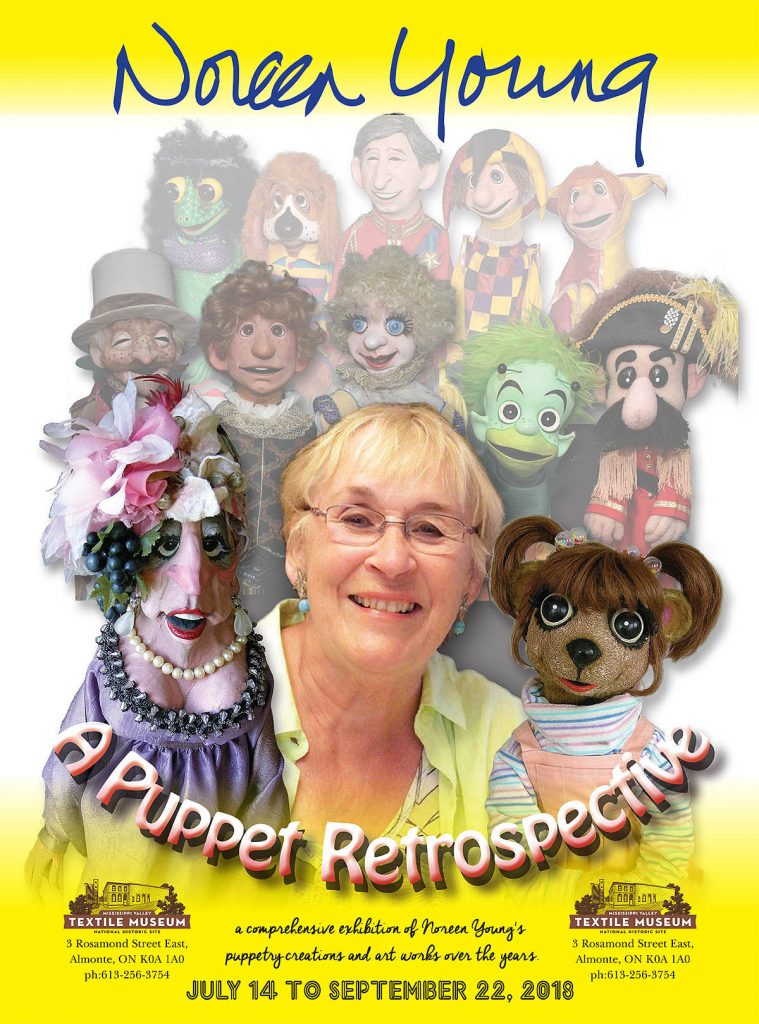 You and a guest are cordially invited to an opening vernissage of “Noreen Young: A Puppet Retrospective” at the Mississippi Valley Textile Museum on July 14 between 2 pm and 4 pm.

The exhibit runs until September 22, “Noreen Young: A Puppet Retrospective” is a summer must-see event for the whole family. Most of the 150 puppets featured have appeared on television, on stage, and in video productions. Some have worked very hard in long-running children’s programs. There are also coconuts and sheep waiting for you to animate them on a puppet stage, as well as “Humanettes” that need heads-yours!

Known across Canada for her talent as a puppeteer and puppet creator, Noreen Young is a local treasure. In 1995, she was awarded the Order of Canada for her contribution to puppetry and children’s television. Two pivotal characters bookended her extraordinary career:  “Mrs. Gertrude Diddle” from High Diddle Day, a CBC program that ran from 1967 to 1976, and “Gloria Gopher” the lead in Under the Umbrella Tree that ran for ten years on CBC, the Disney Channel, and Canal Famille. Both were created, manipulated and voiced by Noreen. She was also the designer, writer and ultimately executive producer of Under the Umbrella Tree.

Her signature technique of translating her skill as a sculptor into flexible, expressive rubber faces has created hundreds of puppet look-alikes of well-known people such as Peter Mansbridge and Don Cherry, as well as caricatures of local Almonte personalities. Many of them are included in the exhibit.

As Artistic Director for Almonte’s annual Puppets Up! International Puppet Festival, which ran from 2005 to 2016, she brought puppet troupes from across Canada and around the world to showcase their talents. And she’s still busy creating. She was recently asked to design and build ten puppets for an adult puppet opera that will be part of Ottawa’s Music and Beyond series for 2018. You can see them in the exhibit.

Noreen Young A Puppet Retrospective Exhibition in Almonte from July 14 to September 22, 2018